To Travel a Different Road: The Translation of African-American Poetry into Yiddish, 1925-1936 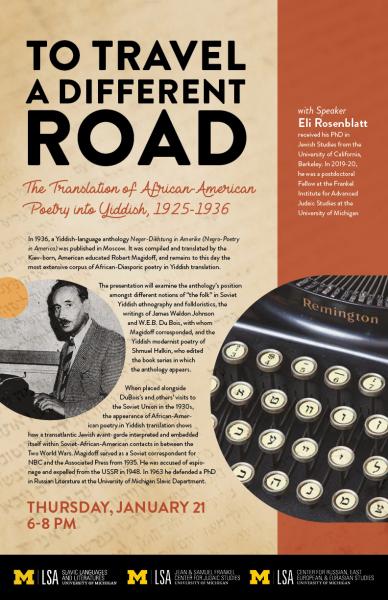 In 1936, a Yiddish-language anthology Neger-Dikhtung in Amerike (Negro-Poetry in America) was published in Moscow. It was compiled and translated by the Kiev-born, American educated Robert Magidoff, and remains to this day the most extensive corpus of African-Diasporic poetry in Yiddish translation. The presentation will examine the anthology’s position amongst different notions of “the folk” in Soviet Yiddish ethnography and folkloristics, the writings of James Weldon Johnson and W.E.B. Du Bois, with whom Magidoff corresponded, and the Yiddish modernist poetry of Shmuel Halkin, who edited the book series in which the anthology appears. When placed alongside DuBois's and others' visits to the Soviet Union in the 1930s, the appearance of African-American poetry in Yiddish translation shows how a transatlantic Jewish avant-garde interpreted and embedded itself within Soviet-African-American contacts in between the Two World Wars. Magidoff served as a Soviet correspondent for NBC and the Associated Press from 1935.
He was accused of espionage and expelled from the USSR in 1948. In 1963 he defended a PhD in Russian literature at the University of Michigan Slavic Department.
Center for Russian, East European, and Eurasian Studies
500 Church Street
Weiser Hall, Suite 500
Ann Arbor, MI 48109-1042
crees@umich.edu
A member of the International Institute
734.764.0351
734.763.4765
Sitemap
Facebook Twitter Youtube WordPress LinkedIn