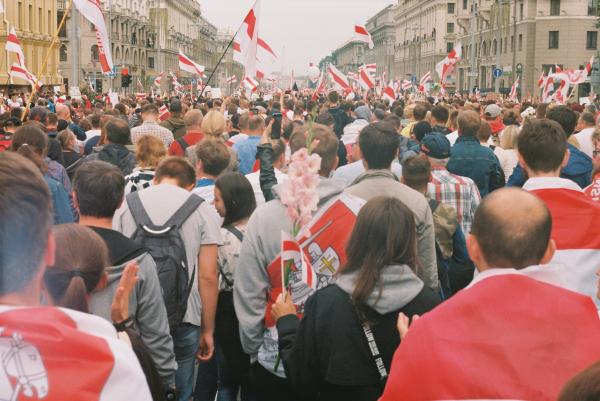 This panel will discuss and analyze the recent controversial presidential election in Belarus, subsequent large-scale protests demanding democratic change, and the state's response, including police violence and accusations of foreign intervention. Register at http://myumi.ch/2D1VB.

Adam E. Casey is a research fellow at the Weiser Center for Emerging Democracies at the University of Michigan. He received his PhD in political science from the University of Toronto in May 2020. His research interests include authoritarian regimes, comparative civil-military relations, Soviet and Russian foreign policy, and democratization. His work has been published in World Politics, Post-Soviet Affairs, Foreign Affairs, and the Washington Post. He is currently working on a book manuscript on the relationship between foreign support and authoritarian rule, as well as a new collaborative project on the origins of military forces in autocracies.

Sasha de Vogel is a PhD candidate in political science at the University of Michigan. She specializes in authoritarian politics, collective action, and the politics of the former Soviet Union, particularly Russia. Her research considers how authoritarian regimes respond to protest movements, the conditions in which protesters are promised concessions, and the effect that concessions have on protesters’ ability to sustain activism. Her research has been supported by a National Science Foundation Doctoral Dissertation Research Improvement Grant, a Carnegie Corporation-Harriman Institute Research Grant for Ph.D. Students in the Social Sciences, and a Weiser Emerging Democracies Fellowship, among other grants.

Natalia Forrat is a WCED Visiting Associate and a research affiliate at the Governance Project at the Center on Democracy, Development, and the Rule of Law, Stanford University. She was a postdoctoral fellow at WCED in 2018-20. She received her PhD in sociology from Northwestern University in 2017 and, before coming to the University of Michigan, was a pre-doctoral fellow at CDDRL at Stanford as well as a postdoctoral fellow at the Kellogg Institute, University of Notre Dame. Her academic interests focus on state-society relations, political regimes, governance, and civil society. Currently, Natalia is finishing her book on the social basis of authoritarian power in Russia and working on a survey of civil servants in Ukraine and Kazakhstan as a part of Stanford’s Governance Project. You can learn more about her work at www.nataliaforrat.com.

If you are a person with a disability who requires an accommodation to attend this event, please reach out to weisercenter@umich.edu at least 2 weeks in advance of this event. Please be aware that advance notice is necessary as some accommodations may require more time for the university to arrange.
Center for Russian, East European, and Eurasian Studies
500 Church Street
Weiser Hall, Suite 500
Ann Arbor, MI 48109-1042
crees@umich.edu
A member of the International Institute
734.764.0351
734.763.4765
Sitemap
Facebook Twitter Youtube WordPress LinkedIn