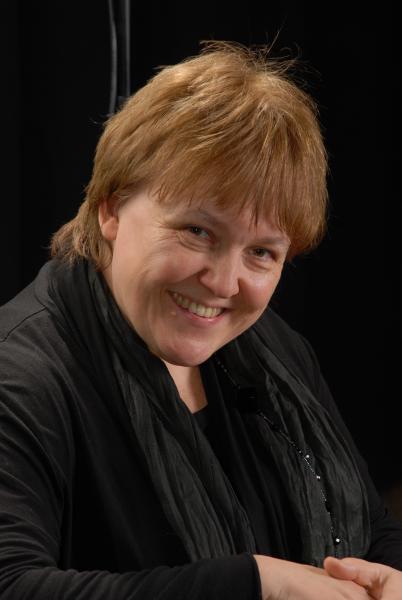 The theater world in Russia is lively as ever, with a range of styles and interests represented by innovative and original work. But that world is also under significant threat as the Russian state puts increasing pressure on theaters and especially directors. The substance of the great art of theater is communication, respect, reverence, and an unflagging belief in humanity. Theater thrives on humanity the way flowers feed on soil, sun, and water. It in turn produces the conditions for humanity to grow. Theater produces and nurtures community and brings people together. In her lecture, Irina Khutsieva will expound on the relationship between theater, state and society in today's Russia.

Irina Khutsieva is a stage director and acting instructor in Moscow, Russia. Trained at “GITIS,” the Russian Academy of Theatrical Art, she has more than 30 years of experience in Russian theater. She now directs her own studio theater, the Chamber Theater, Moscow, founded in 2004. Khutsieva has staged more than 50 plays in Russia, Germany, and the U.S. She has worked at one of Russia’s most distinguished theater academies – the Shchepkin Higher Theatre Institute, associated with the State Academic Maly Theatre of Russia. She also has extensive experience teaching college drama majors. A specialist and practitioner of the Stanislavski Method, she incorporates the principles and traditions of Russian psychological theater and has also developed her own staging and teaching methods. In recent years, she has directed a major gala performance shown on Russian national TV and has run workshops for professional actors in regional towns throughout Russia.

If you are a person with a disability who requires an accommodation to attend this event, please reach out to crees@umich.edu at least 2 weeks in advance of this event. Please be aware that advance notice is necessary as some accommodations may require more time for the university to arrange.