ISP Workshop. Belief and Action: The Subjects of Islamic Studies 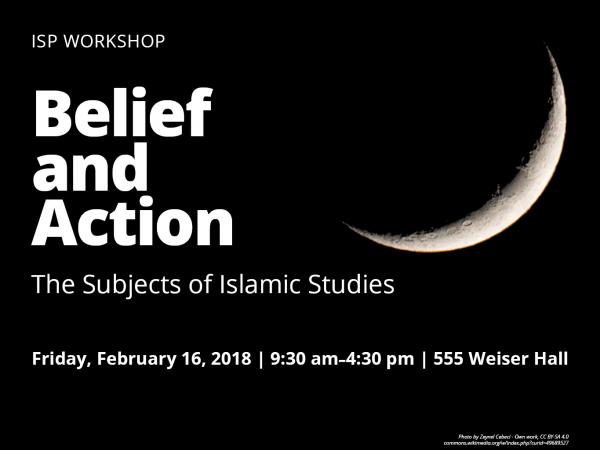 Over the past generation, Islamic studies in North America has undergone a dramatic shift. In nineteenth-century Europe, Orientalism embraced the study of the histories, cultures, and religions of lands from the southern and eastern Mediterranean through Central Asia and into the Indian subcontinent. Orientalist scholars typically were not themselves natives of any of these regions; nor were they themselves Muslims. In the course of the last two centuries, Orientalism has been atomized: divided into distinct fields of regional and disciplinary studies. At the same time, the study of Islam—the religion, the culture, and the civilization—has gone global; scholars today study the history, current state, and future of Islam and Muslims worldwide. And today, students and teachers of Islamic studies are much more likely to come from within the tradition: born to Muslim families or in Muslim-majority regions, or converts to the faith. Yet in the field of Islamic studies—as in other religious studies disciplines—scholars struggle to account for the subject of their inquiry. They debate the focus of Islamic atudies: societies, cultures, or religion itself. They seek a scholarly vocabulary to talk about belief, and to think together about the relationship between belief, scholarship, and pedagogy. And they debate the role that action and activism plays for scholars in the field.

At this workshop, we will convene a group of scholars from U-M and other North American universities to discuss the genealogy, current state, and future of Islamic studies in North American universities. How has Islamic studies evolved over the last two centuries? How has the rising number of Muslim scholars in the field changed the nature of our scholarship? What changes must still happen, in order to provide leadership within American universities and in American society at large? How does scholarship intersect with action, activism, and advocacy? How can Islamic studies serve as a model for programs of religious studies in general? This workshop will consist of a series of roundtable discussions, structured in order to facilitate discussion. Each roundtable will pair two scholars working in disparate regions, disciplines, and historical periods. Each participant will speak for about ten minutes, followed by a conversation among scholars and attendees. The workshop is designed to facilitate free-ranging, creative discussion, and to integrate the audience in all discussions, in order to take stock of the field and generate a productive discussion of our future.