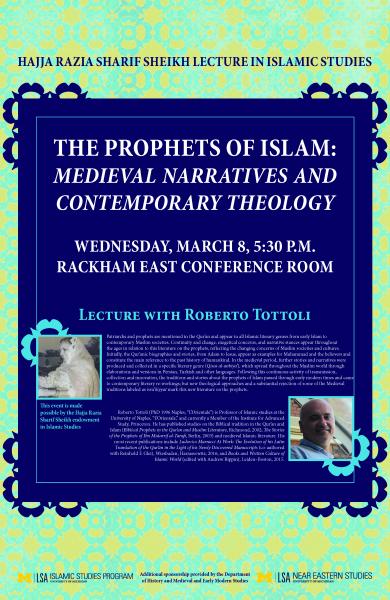 Patriarchs and prophets are mentioned in the Qur’an and appear in all Islamic literary genres and literature from early Islam to contemporary Muslim societies. Continuity and change, exegetical concerns and narratives stances appear throughout the ages in relation to this literature on the prophets, reflecting the changing concerns of Muslim societies and cultures. At the beginning the Qur’anic lives and stories from Adam to Jesus are given as an example for Muhammad and the believers and constitute the main reference to the past history of humankind. In Medieval ages further stories and narratives were produced. These stories were collected in a specific literary genre (Qisas al-anbiya’) and spread in the Muslim world through elaborations and versions in Persian, Turkish and all the other languages. Following a continuous activity of transmission, collection and innovation, the traditions and stories about the prophets of Islam crossed late Medieval and modern times and came to contemporary literary re-workings. But new theological approaches and a substantial rejection of some of the Medieval traditions labeled as isra’iliyyat mark this new literature on the prophets.


Roberto Tottoli (PhD 1996 Naples - Orientale) is Professor of Islamic studies at the University of Naples L'Orientale and during the year Member of the Institute for Advanced Study, Princeton. He has published studies on the Biblical tradition in the Qur’an and Islam (Biblical prophets in the Qur’an and Muslim literature, Richmond, 2002; The stories of the prophets of Ibn Mutarrif al-Tarafi, Berlin, 2003) and the medieval Islamic literature. His most recent publications include Ludovico Marracci at work: The Evolution of his Latin translation of the Qur’ān in the light of his newly discovered manuscripts (co-authored with Reinhold F. Glei), Wiesbaden, Harrassowitz, 2016; and Books and Written Culture of Islamic World. Studies Presented to Claude Gilliot on the Occasion of His 75th Birthday (edited with Andrew Rippin), Leiden – Boston, 2015.