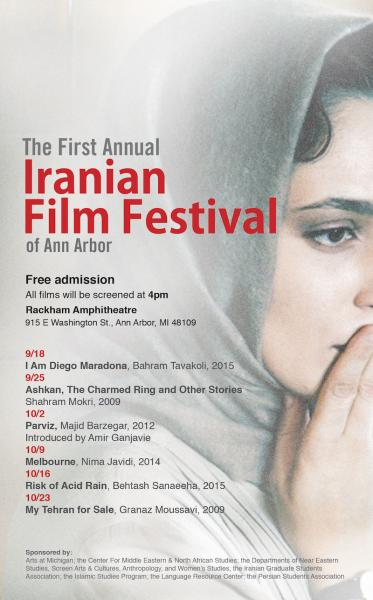 The Department of Near Eastern Studies and the Iranian Graduate Students Association is proud to announce the first Annual Iranian Film Festival of Ann Arbor, showcasing the work of a new generation of Iranian filmmakers. The following films will be screened at 4pm in the Rackham Amphitheatre; admission is free and open to the public.

Please note that film scholar Amir Ganjavie, who will introduce Parviz on October 2, will also deliver a lecture on October 3 entitled "Utopia and Censorship: Iranian Cinema at the Crossroads of Love, Sex, and Tradition" (4:10–5:30pm, 2022 STB).

For further information, visit https://persian.nes.lsa.umich.edu/iff/ or email us at iranian-film-festival@umich.edu.