Professor Samer Ali - "Adab" Humanism in the Arabo-Islamic Middle Ages: The Politics and Poetics of Vulnerability 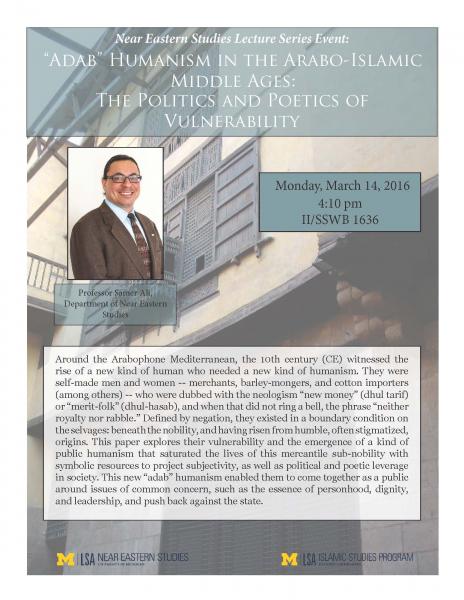 Around the Arabophone Mediterranean, the 10th century (CE) witnessed the rise of a new kind of human who needed a new kind of humanism. They were self-made men and women -- merchants, barley-mongers, and cotton importers (among others) -- who were dubbed with the neologism “new money” (dhul tarif) or “merit-folk” (dhul-hasab), and when that did not ring a bell, the phrase "neither royalty nor rabble." Defined by negation, they existed in a boundary condition on the selvages: beneath the nobility, and having risen from humble, often stigmatized, origins. This paper explores their vulnerability and the emergence of a kind of public humanism that saturated the lives of this mercantile sub-nobility with symbolic resources to project subjectivity, as well as political and poetic leverage in society. This new "adab" humanism enabled them to come together as a public around issues of common concern, such as the essence of personhood, dignity, and leadership, and push back against the state.