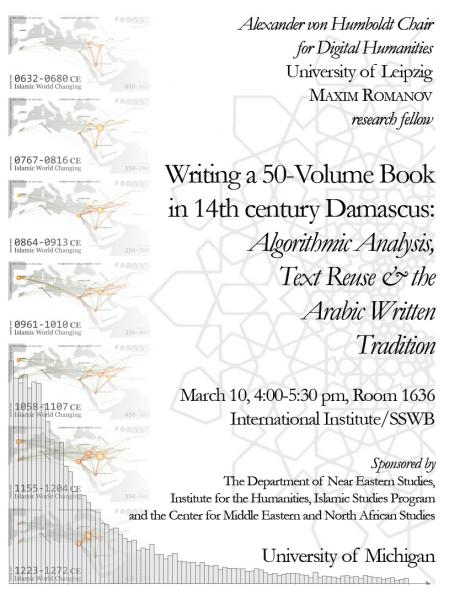 With at least 25,000 unique titles identifiable for the period before 1500 CE, the Arabic written tradition is one of the greatest treasuries of knowledge in human history. Covering practically every aspect of Islamic culture, this tradition is particularly rich in extensive historical sources such as chronicles and biographical collections. Most specimens of these two forms, which often smoothly crossover into each other, are multivolume titles that aggregate and copiously reuse earlier sources, and, in their turn, get reused in later sources. Perhaps the largest specimen of these two genres is a 50-volume title, “The History of Islam” (Taʾrīḫ al-islām), which was written by the famous Damascene religious scholar, chronicler and biographer Šams al-dīn al-Ḏahabī (d. 748/1347 CE). Dubbed “one of the most ambitious histories of the entire world of Islam,” this library of a book (~3,4 mln. words) covers 700 years of Islamic history through over 30,000 biographical records. Although nobody has ever doubted that this “History” is a compilation of earlier sources, we have no understanding of the composition of this text: What earlier sources did al-Ḏahabī use? How and to what extent did he use his sources? Did he paraphrase, summarize, or quote his sources? How is his “History” related to his other writings? What kind of understanding did al-Ḏahabī have of the historical information that he collected? How does al-Ḏahabī’s work fit into the Arabic historiographical tradition? Was indeed a great historian who had written the most ambitious historical text or was he just an obsessive compiler?

None of these questions can be answered convincingly with traditional methods of historical inquiry. A computational approach of tracing text reuse in large corpora that fuels Viral Texts Project ( http://viraltexts.org/ @ Northeasern University) offers a new perspective that will revolutionize the way how the scholars view not only the Arabic historiography, but the entire Arabic written tradition. Using this approach that combines computational algorithms for tracing similarities among texts with the use of high-power computing, the presentation will address three large sets of questions: 1) about the Arabic written tradition and the place of al-Ḏahabī’s “History” in it; 2) his method of writing/compilation; and 3) his work as a historian.