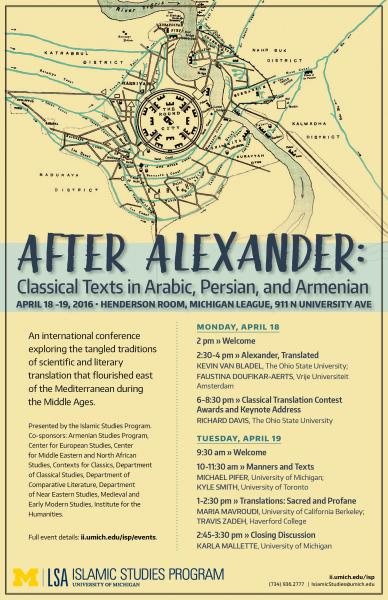 In recent years, translations between the classical languages – principally Greek, Arabic and Latin – in the western Mediterranean have attracted robust scholarly attention. This conference aims to shift attention to a prequel to the late medieval translation movement in the west. The title suggests both a geography – east of the Mediterranean – and a historical arc, late antique and medieval (or Umayyad and Abbasid). The conference will explore the entangled traditions of scientific and literary translation that flourished after Islamic expansion into territories once conquered by Alexander and ruled by the Sasanian Empire, where Arabic, Persian and Armenian intellectual and literary traditions encountered and responded to the heritage of the Greeks – and to each other.

This conference is presented in conjunction with the Classical Translation Contest - Classical Arabic, Persian, Armenian, and Turkish. Open to all U-M undergraduate and graduate students. Winners of this contest will be invited to present their translations on April 18, 2016 during the “After Alexander” conference. Submissions for the contest are due on Friday, April 1, 2016 by 5:00 PM to the Comparative Literature Main Office, 2021 Tisch Hall (2nd floor). Visit http://lsa.umich.edu/contextsforclassics for details.