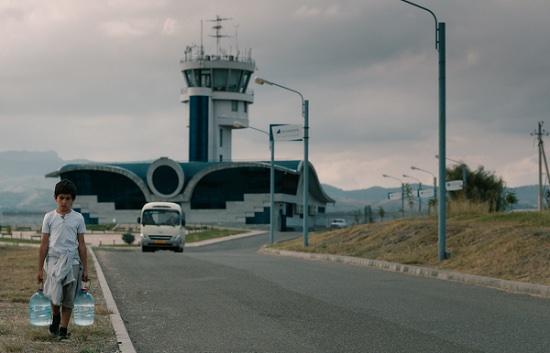 You can also participate virtually by registering in advance for the webinar here: https://myumi.ch/wlB27.
After registration, you will receive a confirmation email with instructions on how to join the webinar.
Virtual participants will be able to join for the Q/A part with the film director at 7:45 PM, after the in-person screening of the film.

In this film, Martirosyan takes us on a journey to discover Nagorno-Karabakh, its timeless scenery, and its inhabitants who fight daily for the recognition of their state. Through the Western perspective of her main character, portrayed by Grégoire Colin, Martirosyan allows the viewer to discover this territory which has its own capital, president, and constitution, despite not being recognized at a legal and geopolitical level.

Alain, an international auditor, arrives to assess the airport of a small self-proclaimed republic in the Caucasus in order to give the green light for its reopening. Edgar, a local boy, runs his own peculiar small business outside the airport. After interacting with the child and other residents, Alain is able to discover this isolated land and will risk everything to allow the country to open up.

Nora Martirosyan is a film director and an artist who was born in Armenia and lives in France. She graduated from art school in Yerevan (Armenia), Le Fresnoy (France) and the Rijksakademie in Amsterdam. She was resident at the Villa Medicis, the French Academy in Rome during 2013-14. Currently, she is a Professor at Bordeaux School of Fine Arts.

Martirosyan has directed several award-winning short films and her feature film “Should the wind drop” is the first Armenian film in the official selection of Cannes film festival since 1965.

If there is anything we can do to make this event accessible to you, please contact us at caswebinars@umich.edu. Please be aware that advance notice is necessary as some accommodations may require more time for the university to arrange.
Center for Armenian Studies
Weiser Hall
500 Church Street, Suite 500
Ann Arbor, MI 48109-1042
armenianstudies@umich.edu
A member of the International Institute
734.763.0622
734.763.4765
Sitemap
Facebook Youtube