What does war do to our ability to communicate with one another and “the other?” 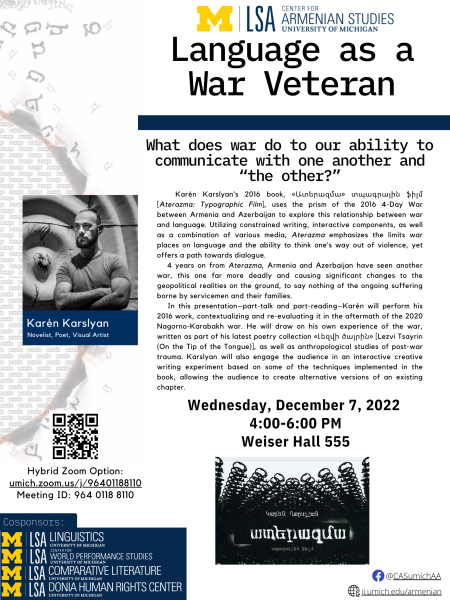 This hybrid event will be held in person on December 7th in Weiser Hall 555. It will also be available to attend via zoom using the following link: https://myumi.ch/84bqq or by entering the Meeting ID: 964 0118 8110.

Cosponsored by the U-M Departments of Linguistics and Comparative Literature, as well as the Center for World Performance Studies and the Donia Human Rights Center.

Karén Karslyan’s 2016 book, «Ատերազմա» տպագրային ֆիլմ [Aterazma: Typographic Film], uses the prism of the 2016 4-Day War between Armenia and Azerbaijan to explore this relationship between war and language. Utilizing constrained writing, interactive components, as well as a combination of various media, Aterazma emphasizes the limits war places on language and the ability to think one’s way out of violence, yet offers a path towards dialogue.

4 years on from Aterazma, Armenia and Azerbaijan have seen another war, this one far more deadly and causing significant changes to the geopolitical realities on the ground, to say nothing of the ongoing suffering borne by servicemen and their families.

In this presentation—part-talk and part-reading—Karén will perform his 2016 work, contextualizing and re-evaluating it in the aftermath of the 2020 Nagorno-Karabakh war. He will draw on his own experience of the war, written as part of his latest poetry collection «Լեզվի ծայրին» [Lezvi Tsayrin (On the Tip of the Tongue)], as well as anthropological studies of post-war trauma. Karslyan will also engage the audience in an interactive creative writing experiment based on some of the techniques implemented in the book, allowing the audience to create alternative versions of an existing chapter.

About Karén: Karén Karslyan is a poet, novelist, visual artist, and translator. Born and raised in Armenia, he moved to the United States in 2005. He earned a PhD in English from Yerevan State Linguistic University, where his dissertation centered around a comparative intertextual reading of Lawrence Sterne’s Tristram Shandy and James Joyce’s Finnegans Wake. Karslyan writes and translates between Armenian, English, and Russian. His literary work often pushes boundaries, and his most recent Armenian-language publications include the play "The Regime is in Panic" (Actual Art, 2019) and Aterazma: Typographic Film (Inknagir, 2016), a commentary on war, interethnic hatred, and the ongoing Nagorno-Karabakh conflict. Both texts employ the technique of constrained writing and combine traditional writing with visual media and performance. Karslyan’s other publications include «Լեզվի ծայրին» [Lezvi Tsayrin (On the Tip of the Tongue)], a recently published poetry collection from Granish press in Armenia (an excerpt of which was recognized as Granish’s best poetry of 2021), as well as Doomed to Spell (Inknagir, 2010), X Frames/Sec (Bnagir, 2003), and his 2015 translation of Kathy Acker’s Lust (Inknagir). His poems have appeared in a number of anthologies in English, Spanish, French, Serbian, Georgian, and Greek translation. Karslyan is the chairman of the Peace Committee of PEN Armenia and was recognized as writer of the year by Armenian Public TV in 2003.

If there is anything we can do to make this event accessible to you, please contact us at vmmourad@umich.edu. Please be aware that advance notice is necessary as some accommodations may require more time for the university to arrange.
Center for Armenian Studies
Weiser Hall
500 Church Street, Suite 500
Ann Arbor, MI 48109-1042
armenianstudies@umich.edu
A member of the International Institute
734.763.0622
734.763.4765
Sitemap
Facebook Youtube