CAS Lecture | A Disease in the Lungs of Anatloia: Politics of Reform and Modernization at the intersection of Armenian, Kurdish, and Kizilbach Questions across Empire and Nation-State

Presented by Cevat Dargin, the Postgraduate Research Associate from the Department of Near Eastern Studies of Princeton University 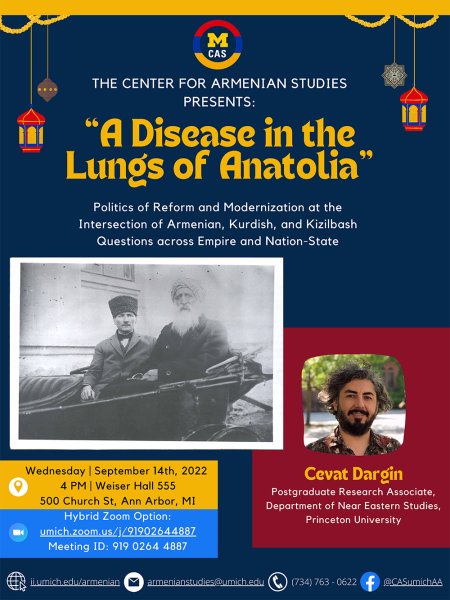 In their efforts to modernize the state and establish direct rule in territories under their sovereignty, the late imperial Ottoman and early republican Turkish state elites faced a common problem: Dersim. A Kizilbash Kurdish–majority region with a rich and diverse natural environment in Eastern Anatolia, Dersim toward the end of the nineteenth century became a domain where the Kurdish, Armenian, and Alevi (historically known as Kizilbash) questions came together and clashed with the project of Ottoman and Turkish state formation. Subsumed under the banner of the Eastern Question in the literature, these interwoven questions placed foundational limits on the late imperial and early republican state in the realms of ethnicity, religion, and geography, and turned Dersim into a battlefield for Turkish state making. Often used interchangeably with “military operation,” the language of “reforming Dersim” started under the Ottoman administration in the mid-nineteenth century, gained momentum following the Russo-Turkish War of 1877–78 and reached its peak with the early republican era. After the Turkish state’s violent transformation of the region in 1937–38, the state elite abandoned the word reform (ıslahat), which indicates that they had achieved what they understood by “reforming Dersim.” The survivors of the Dersim massacres and their descendants, however, remember Dersim 38, a phrase that evokes tragic memories of genocidal operations in the region, as a collective trauma. This lecture provides the conflicting narratives of this “reform process” from the perspective of both the state elite and the inhabitants of Dersim. It proposes that mutual fear and insecurity defined both the state elite’s approach to Dersim and the Dersimis’ reactions to the state, and all three of the Armenian, Kizilbash, and Kurdish questions played a role.

Cevat Dargın specializes in modern Middle Eastern and Eurasian history with a focus on the late-nineteenth and early twentieth-century transformations from empires to nation-states and their impact on borderlands and peoples in the peripheries. Interested in the theory of internal colonialism as a means of state making, his research explores continuities across regime changes and revolutions. Cevat earned his PhD from the Department of Near Eastern Studies at Princeton University in 2021. He is currently working on several publication projects based on his doctoral research on the history of Dersim, an Alevi Kurdish–majority region with a rich and diverse natural environment in Eastern Anatolia, from the Russo-Turkish War of 1877–78 to the Turkish state’s violent transformation of the region in 1937–38.
Center for Armenian Studies
Weiser Hall
500 Church Street, Suite 500
Ann Arbor, MI 48109-1042
armenianstudies@umich.edu
A member of the International Institute
734.763.0622
734.763.4765
Sitemap
Facebook Youtube