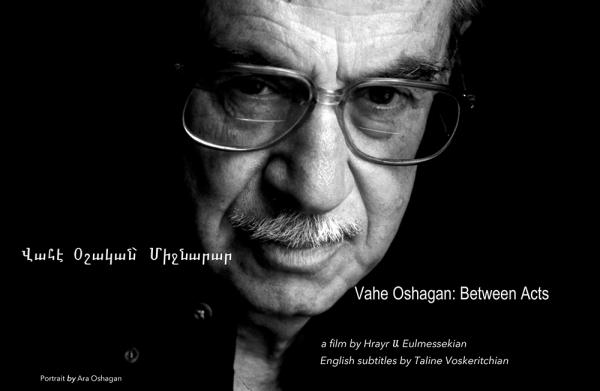 "Vahé Oshagan: Between Acts" (2016) is an experimental documentary by Hrayr Eulmessekian about the prominent and prolific diaspora Armenian poet and public intellectual Vahé Oshagan (1922-2000). Representation as we commonly know and experience it — as political, scientific (including historical), artistic and mental — is torn and shorn by diaspora. Few diaspora Armenian artists see and seize this opportunity to create open-ended and radically interrogative works. Eulmessekian is one of them. His film invites seeing and hearing deeply by painstakingly skirting along the edges of ‘historical,’ ‘documentary,’ ‘natural,’ ‘realistic,’ ‘monolingual,’ ‘familial,’ and ‘everyday’ representations. The film features Vahé Oshagan reading and commenting on his poetry, as well as analysis of his work by well known literary critics. Ultimately, encountering Eulmessekian’s work amounts to experiencing the uncanny effect of diasporic emergence from arrested representation.

The screening will be followed by an artist talk. Hrayr Eulmessekian will reflect on the various strands of his work and the way they have been perceived and received by curated gallery spaces around the world. The evening will conclude with a panel discussion joined by Taline Voskeritchian.

Beirut born artist and filmmaker Hrayr Eulmessekian’s works have been exhibited, screened, or broadcasted in cities around the world. A founding member of the San Francisco Armenian Film Festival, he serves on its curatorial team. He was the guest editor of the 2014 Spring issue of ArteEast Quarterly. Eulmessekian is the recipient of the major grants from MGM/UA, Grants for the Arts San Francisco, New York Foundation for the Arts, and the Calouste Gulbenkian Foundation.

Taline Voskeritchian’s prose and translations (from Arabic and Armenian) have appeared in literary reviews in North America, Europe, and the Middle East. In April 2011, as part of the international delegation of writers to Palestine Festival of Literature, she conducted writing/translation workshops in Palestinian universities. For the 2016 and 2017 fall semesters, she taught writing at the American University of Armenia, Yerevan. Currently she teaches writing and literature at Boston University.
Center for Armenian Studies
Weiser Hall
500 Church Street, Suite 500
Ann Arbor, MI 48109-1042
armenianstudies@umich.edu
A member of the International Institute
734.763.0622
734.763.4765
Sitemap
Facebook Youtube