People, Places, and Power across Empire and Nation-State 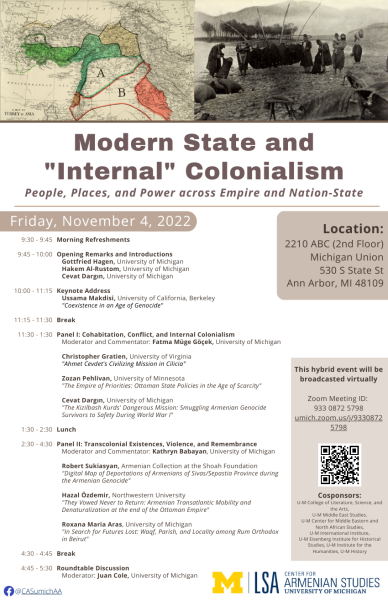 In parallel to the process of external colonization around the world, modern state makers simultaneously conquered and colonized people and places within their territorial boundaries by rendering them legible through knowledge production and manageable through force, coercion, intimidation, and, at times, reward. Mountains, deserts, and valleys that have sustained ecosystems of livelihood beyond the control of, and often despite, central administrations became the last bastions of coexistence challenging the expansion of modern state. Scholars such as Harold Wolpe, Rivera Cusicanqui, Robert Blauner, Michael Hechter, James Scott, and Uğur Ümit Üngör have applied the theory of internal colonialism to state-making processes in places as far and wide as, respectively, South Africa, Latin America, North/Black America, England, Southeast Asia, and Turkey. Seemingly provincial yet global in scale, such a wide-ranging applicability shows that internal colonialism has been as widespread and crucial as external colonization—i.e., colonialism par excellence—in the making of the modern world.

This workshop brings together scholars whose works challenge disciplinary boundaries and existing periodizations and who engage creatively with underrepresented themes and groups in different parts of the world. The main objective is to explore different approaches to intercommunal relations and environmental circumstances before, during, and after the absorption of nonstate people and places into a centrally administered modern state. By employing approaches outside state-society, center-periphery, and sovereign-subject dichotomies in conversation with one another, we hope to qualify the metanarratives of collective communal violence that treat ethnic and religious communities as hostile and monolithic entities. The workshop hopes to shed light on the role of the modern state in transforming intercommunal relations and in shaping collective memories.

To these ends, the first panel discusses narratives of cohabitation and state evasion in the imperial and post-imperial settings. The second panel discusses the transformation of ecosystems of coexistence outside direct state control and the ways in which such pasts are remembered. The roundtable brings together both sets of panelists to discuss internal colonialism as a conceptual framework in exploring the processes of modern state-making and its role in transforming people and places, both in history and memory.

Panelist 2: Zozan Pehlivan, University of Minnesota
"The Empire of Priorities: Ottoman State Policies in the Age of Scarcity"

Panelist 1: Robert Sukiasyan, Armenian Collection at the Shoah Foundation
"Digital Map of Deportations of Armenians of Sivas/Sepastia Province during
the Armenian Genocide"

Panelist 2: Hazal Özdemir, Northwestern University
"They Vowed Never to Return: Armenian Transatlantic Mobility and
Denaturalization at the end of the Ottoman Empire"

If there is anything we can do to make this event accessible to you, please contact us at vmmourad@umich.edu. Please be aware that advance notice is necessary as some accommodations may require more time for the university to arrange.
Center for Armenian Studies
Weiser Hall
500 Church Street, Suite 500
Ann Arbor, MI 48109-1042
armenianstudies@umich.edu
A member of the International Institute
734.763.0622
734.763.4765
Sitemap
Facebook Youtube